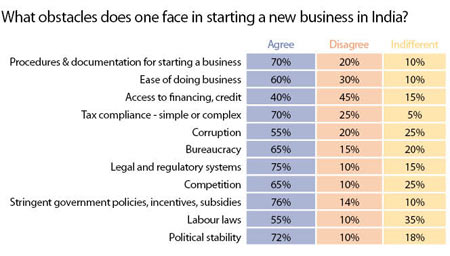 India, only next to china in attracting investments, provides exciting opportunities to people willing to start new businesses. already global behemoths such as honda, samsung et al have reported their stupendous success stories, reaping huge returns from the india’s big comsumer base. through this survey ICMR tries to get into the minds of corporate and entrepreneurs and understand their perception on doing business in india- the ease, the challenges and the returns.
India, a BRIC nation, has been considered as one of the most favourable countries for doing business in the world at present. Ample manpower, cost competitiveness apart from others factors have led many companies to Indian shores to do business. A similar response was observed th the survey. 75% of the respondents felt that it is easy to do business though a decent 20% also said that doing business in India is not easy and that its macro-environment has gone worse. India, traditionally an agriculture based economy, is in the midst of fast economic and social transition. The ICMR survey reflected that almost 40% of the respondents feel that the services sector, comprising of telecom, financial services, education – offers great opportunities. 35% said that agriculture and allied services will reap good returns. Though India is considered a favourable business destination, it also has its own set of obstacles that prevent many from starting a new business. Some of the main obstacles highlighted in the survey were: stringent government policies, incentives and subsidies (76%), time-consuming legal regulatory systems (75%), political instability(72%), lengthy procedures and documentation (70%) and complex tax compliance systems(70%). The Union Budget 2013 has revived the business sentiment in the inflation-hit Indian economy. A huge 75% of the respondents feel that due to new reforms, incentives and subsidies introduced in the budget apart from other developmental policies, businesses would be able to register better returns in FY 2013 over FY 2012. About 40% of the respondents ranked Gujarat as the best state in India to do business in as it offers plethora of opportunities and a congenial business environment, crediting Narendra Modi’s leadership for the same. 30% rated Tamil Nadu as their business destination, while 15% preferred to go for Madhya Pradesh. Though all sectors in India are growing at a rapid pace, providing great avenues for investments, the respondents rated financial services as the hottest investment sector of India. The telecom & IT sector (17%) was found to be the next most sought after business sector for investments. ICMR asked respondents on factors that make India a magnet for doing business. And the key factor that popped as the top answer was India’s big fat consumer market, comprising mainly of a large sized middle class. As per 65% respondents it is the prime growth engine for businesses. This was followed by low cost of manu­facturing (35%) as in India labour costs are very low as com­pared to other nations. 30% of the respondents said that In­dia’s skilled educated young work force and future growth ex­pectations makes it attractive business destination. When the respondents were asked to give their view on which country offers better business environment, opportunities and ease of doing business, Singapore emerged as the top answer. 35% of the respondents said that in terms of corruption, regulatory issues and political stability, Singapore is the destination they would like to set up their business in. 28% suggested it would be China as the country, because of its strong political will, has registered phenomenal growth over the last decade, saying it provides excellent business climate and far better infrastructure and opportunities than India.