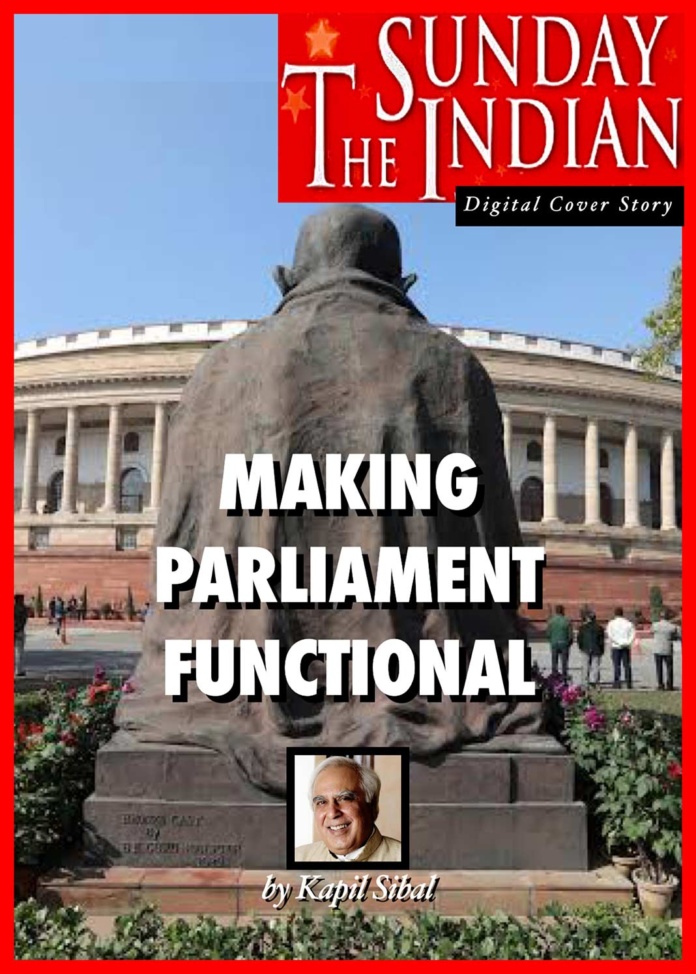 In a parliamentary democracy like India, the Opposition should have the space to hold transparent discussions. If this is not allowed, what follows is noise, not debate.

Our Prime Minister claims to be forward looking. His passion for technology is evident. He extols its virtues for the delivery of public goods. And yet, he has no appetite to reform archaic and regressive procedures when it comes to the functioning of Parliament. He uses power structures outside Parliament to diminish the Opposition and is equally adept at using them within Parliament to silence the Opposition.

If the Prime Minister is so passionate about reforming our political structure by embracing modern systems of governance, he should be equally passionate about reforming parliamentary procedures to make them consistent with the underlying fundamentals of our liberal democracy. While modernity and digitisation are welcome, there is urgent need to reform procedures that cater to the absolutism of decision making within the House.

Democracy cannot function unless the Opposition is allowed space to air its grievances. Under prevailing procedures, the Opposition may demand a discussion on matters it considers necessary but the Minister for Parliamentary Affairs may choose not to agree.

In a parliamentary democracy, the Opposition has a vital and constructive role to play in matters relating to the clearing of legislative proposals as well as raising issues to bring the government to account. This fundamental premise is key to a functioning liberal democracy. In this context, any procedure which allows the government to determine the issues to be discussed, when and under which rule are they to be discussed, is antediluvian. This allows for the government to brush aside any proposal made by the Opposition in which the government might find itself, in the course of discussions in Parliament, to be on the back foot. So what follows is noise, not debate.

I remember the words of my good friend late Arun Jaitley, the then Leader of Opposition during the UPA years, when he said that obstructing the House was part of “parliamentary strategy”. This was when sessions were washed away by an intransigent BJP. The then ruling party used the very same rules to its advantage. If obstruction is a matter of “parliamentary strategy”, then it is obvious that the government “protesteth too much” when the Opposition seeks a discussion under a particular rule. Prevailing parliamentary procedures cut at the very root of democratic processes fundamental to running the House. We must find ways to ensure that while legislative proposals are debated and cleared, the Opposition has its say in discussing matters of its choice.

There is no liberal parliamentary democracy in which the Opposition is belittled and stomped on in the manner in which it is done in India. In the UK, days are set apart in Parliament for the Opposition to discuss issues of its choice. The Treasury Benches there have no veto power on the subjects for discussion. Such procedures eventually help in the functioning of Parliament.

Rules which prohibit discussions on the ground that the matter is sub-judice did not stand in the way when Bofors was discussed in Parliament even while the investigation was on. However, when it came to a discussion on Pegasus or for that matter on the Rafale deal, the Treasury Benches did not allow any debate in the House on the ground that the matter was sub judice.

The rules of procedure should be altered setting apart, for starters, one day a week for Opposition to choose any matter on which it seeks a discussion and answers from the government. On the other hand, the Opposition must ensure that discussions on proposed Bills are consistent with prevalent norms and cleared as per laid down procedures.

Many a times, we find that the Bills which are introduced need to be thoroughly vetted not just because of the complexity of issues involved but because of their impact when cleared. Nowadays, it is rare that Bills waiting to be enacted into law are referred to the Standing Committees of Parliament.

The other important issue, and I am here referring to fundamental issues, is the need for the Prime Minister to answer questions in the House. One day in a week should be reserved for that purpose. We see that happen in other jurisdictions where the Prime Minister shows no hesitation in answering questions and is indeed obliged so to do under rules of procedure.

During recent proceedings in the British Parliament, Prime Minister Boris Johnson was seen answering uncomfortable questions raised not just by the Leader of Opposition but others as well.

No Member of the House of Commons interrupted the proceedings even though serious allegations of impropriety were raised regarding his conduct in matters of governance. Unfortunately, in India, not only do the rules of procedure not allow such open questioning but the questions themselves require to be admitted for which answers are placed in the House only on the morning of the day assigned for answering them.

Since 2014, I for one have not seen any desire by the Prime Minister to engage himself in the House to answer questions during Question Hour.

There should be a complete revamp of the rules so as to make the processes of clearing legislations as well as discussion on issues, open, transparent and outcome-oriented.

A former Chief Justice of India once said that on occasions, you need noisy Judges. That may be a debatable proposition. But a noisy Parliament, which loses valuable time because the Treasury Benches will not allow the Opposition the space needed in the functioning of parliamentary democracy, is an unhealthy trend. We need a constructive Opposition, a responsive Government and rules that are flexible enough to give space to both. The arrogance of power results in a noisy House.